The online version of this article (doi:10.​1007/​s11695-015-1928-8) contains supplementary material, which is available to authorized users.
Byung-Joon Ko and Seung Kwon Myung contributed equally to this work.

In March 2015, we performed a review of the literature using PubMed, EMBASE, and the Cochrane Library. The search focused on retrospective and prospective studies, including but not limited to randomized studies published in English.

Bone density at the femoral neck decreased after bariatric surgery, compared to that in nonsurgical controls, whereas bone density at the lumbar spine did not show a difference between groups. Further larger scale studies with comparative nonsurgical controls are warranted to overcome the heterogeneity among studies in this analysis and to add evidence of possible bone loss subsequent to bariatric surgical procedures. 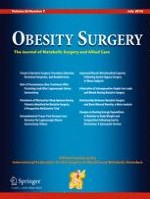 Revision of Roux-En-Y Gastric Bypass for Weight Regain: a Systematic Review of Techniques and Outcomes