Relationship between P1NP, a biochemical marker of bone turnover, and bone mineral density in patients transitioned from alendronate to romosozumab or teriparatide: a post hoc analysis of the STRUCTURE trial | springermedizin.de Skip to main content
TOOLBAR 1 2 3 4
SUCHE MENÜ 1 2 3 4

Procollagen type I N-terminal propeptide (P1NP), a bone formation marker, reportedly predicts bone mineral density (BMD) response to teriparatide treatment in treatment-naive patients with osteoporosis. Results from a randomized, phase 3, open-label, active-controlled trial— STRUCTURE—showed that in patients previously treated with bisphosphonates, romosozumab led to gains in hip BMD, which were not observed with teriparatide. This post hoc analysis investigated the comparative utility of early changes in P1NP in predicting BMD response in patients who participated in the STRUCTURE trial, which enrolled patients who switched treatment from bisphosphonates to romosozumab/teriparatide.

Postmenopausal women (aged 55–90 years) with osteoporosis who had previously taken bisphosphonates were randomized to receive open-label subcutaneous romosozumab (210 mg once monthly; n = 218) or teriparatide (20 µg once daily; n = 218) for 12 months. BMD was assessed by dual-energy X-ray absorptiometry at the proximal femur and lumbar spine (LS) at baseline and months 6 and 12. To assess the utility of P1NP, the positive predictive value of increase from baseline in P1NP of > 10 µg/L at month 1 and achievement of various thresholds of percent change from baseline in BMD at month 12 were evaluated.

Thus, increases in P1NP were not predictive of BMD response in the teriparatide group because in approximately 60% of the patients who were administered teriparatide, the hip BMD decreased independent of the change in P1NP levels. 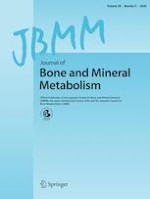 Mineralization of cortical bone during maturation and growth in rabbits