The factors responsible for the production of isoflavone metabolites have not yet been identified. We aimed to examine the relationships of equol production between mother and child in a birth cohort in Japan.

Subjects were a part of the participants in a longitudinal study on pregnant women and their offspring. When children were 5–7 years old, mothers and children were asked to reply to a questionnaire on lifestyles and a 3-day child’s dietary record. Mothers and children were given a bar-shaped soy snack (Soyjoy®) daily on two consecutive days (soy challenge). The snack contained 14 mg of overall soy isoflavones as the sum of aglycones and the glucosides for mothers and 7.5 mg for children. On the morning of day 0 and 3, they were asked to mail their first-void urines. Urinary isoflavone metabolites of 159 mother–child pairs were measured by a high-performance liquid chromatography method. 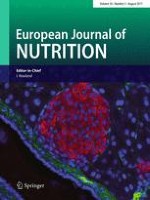 Alcohol consumption is associated with DXA measurement of adiposity: the Pró-Saúde Study, Brazil

Vegetarianism and colorectal cancer risk in a low-selenium environment: effect modification by selenium status? A possible factor contributing to the null results in British vegetarians