African-Americans have been shown to have poorer weight loss outcomes after bariatric surgery, and many reasons for such outcomes have been postulated, including metabolic and genetic differences, socioeconomic factors, and differences in culture. African-Americans have also been noted to have differences from the majority population in other psychosocial correlates to weight loss outcomes. However, the relative contribution of targetable factors in relation to non-modifiable factors to such outcomes remains unclear. African-American and Caucasian patients who had received a Roux-en-Y gastric bypass and returned for a 12-month follow up appointment (n = 415) were selected for retrospective analysis. A stepwise hierarchical regression of 12 month percent excess weight loss (% EWL) was conducted that included race after controlling for psychosocial and demographic factors previously linked to postsurgical outcomes. These variables were then compared between racial groups using independent t tests and chi-square analyses. Race remained a significant predictor of % EWL after controlling for pertinent psychosocial and demographic variables. Age and preoperative BMI were significant negative predictors, whereas presurgical BMI loss and Caucasian race were positive (p < 0.05). Percentage of follow-up appointment attendance was borderline significant. No significant racial differences were noted in these variables. Non-modifiable factors inherent to race such as metabolism play small but significant roles in the postoperative weight loss in African-American patients. Further research is needed to better elucidate the roles of targetable factors in outcomes, particularly adherence and pay status as their evaluation in this study was limited. 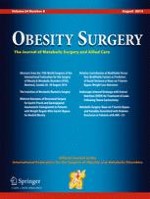 The Evolution of Metabolic/Bariatric Surgery

Abstracts from the 19th World Congress of the International Federation for the Surgery of Obesity & Metabolic Disorders (IFSO), Montreal, Canada 26–30 August 2014

Reply to Letter to the Editor by Dr. Dimitrios Tsamis

Our Bariatric Surgery History: Where We Came From