The online version of this article (doi:10.​1007/​s11999-014-4032-9) contains supplementary material, which is available to authorized users.
One of the authors (SDS) has received funding from the Deutsche Arthrose-Hilfe e.V. One author (MT) has received funding from the Swiss National Science Foundation (SNSF).
All ICMJE Conflict of Interest Forms for authors and Clinical Orthopaedics and Related Research ® editors and board members are on file with the publication and can be viewed on request.
Each author certifies that his or her institution approved the human protocol for this investigation, that all investigations were conducted in conformity with ethical principles of research, and that informed consent for participation in the study was obtained.

We retrospectively reviewed 40 patients (41 hips) with isolated relative femoral neck lengthening between 1998 and 2006 with sequelae of Legg-Calvé-Perthes disease (38 hips [93%]), slipped capital femoral epiphysis (two hips [5%]), and postseptic arthritis (one hip [2%]). During this time, the general indications for this procedure included a high-riding greater trochanter with a short femoral neck with abductor weakness and symptomatic intra-/extraarticular impingement. Mean patient followup was 8 years (range, 5–13 years), and complete followup was available in 38 patients (39 hips [95%]). We evaluated pain and function with the impingement test, limp, abductor force, Merle d’Aubigné-Postel score, and range of motion. Radiographic parameters included trochanteric height, alpha angle, and progression of OA. Subsequent surgeries, complications, and conversion to THA were summarized.

Relative femoral neck lengthening in hips with combined intra- and extraarticular impingement results in reduced pain, improved function, and improved radiographic parameters of the proximal femur. Although lack of long-term complications is gratifying, progression of OA was not prevented and remains an area for future research. 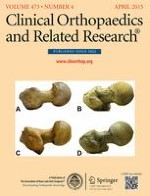 Editorial: Estimating Survivorship in the Face of Competing Risks

Intramedullary Nailing of Femoral Diaphyseal Metastases: Is it Necessary to Protect the Femoral Neck?

No Sex Differences Exist in Posterior Condylar Offsets of the Knee