Strenuous exercise induces a rapid and transient elevation of cell free DNA (cfDNA) concentration in blood plasma. The detection of cfDNA in the presence of plasma nucleases could indicate an association of cfDNA with protective vesicular structures. Several cell types release extracellular vesicles (EVs), including exosomes and shedding microvesicles, which are known to mediate the exchange of proteins and nucleic acids (largely RNA) between cells. Here, we assessed whether EVs play a role in the exercise-dependent release of cfDNA in blood plasma.

Venous blood collected from healthy volunteers before and after incremental treadmill exercise was separated into vesicular (EV) and soluble fractions. Nuclear and mitochondrial DNA content in plasma supernatants and EV fractions was determined by quantitative real-time PCR (qPCR).

We show that the majority of cfDNA is located in the plasma supernatants. Only minute amounts of DNA were observed in the EV-associated fractions including microvesicles and exosomes. Nuclear and mitochondrial DNA species differ in terms of their quantities in the several plasma fractions.

Our results indicate that cfDNA liberated in response to acute physical exercise is not released by vesicular means and circulates in a soluble form in blood plasma which could indicate different biological functions exerted by cfDNA and EVs. The different nature of DNA species in plasma has major implications for the preparation of plasma and other bodily fluids prior to analysis. 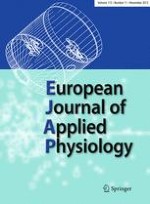 Muscle activation during three sets to failure at 80 vs. 30 % 1RM resistance exercise