Relevance of the N-terminal and major hydrophobic domains of non-structural protein 3A in the replicative process of a DNA-launched foot-and-mouth disease virus replicon | springermedizin.de Skip to main content
TOOLBAR 1 2 3 4
SUCHE MENÜ 1 2 3 4

A foot-and-mouth disease virus (FMDV) DNA-launched reporter replicon containing a luciferase gene was used to assess the impact of non-structural (NS) protein 3A on viral replication. Independent deletions within the N-terminal region (amino acid [aa] residues 6 to 24) and the central hydrophobic region (HR, aa 59 to 76) of FMDV NS protein 3A were engineered, and luciferase activity in lysates of control and mutated replicon-transfected cells was measured. Triple alanine replacements of the N-terminal triplet Arg 18- His 19 -Glu 20 and a single alanine substitution of the highly charged Glu 20 residue both resulted in a 70-80% reduction in luciferase activity when compared with wild-type controls. Alanine substitution of the 17 aa present in the central HR, on the other hand, resulted in complete inhibition of luciferase activity and in the accumulation of the mutated 3A within the cell nucleus according to immunofluorescence analysis. Our results suggest that both the aa sequence around the putatively exposed hydrophilic E20 residue at the N-terminus of the protein and the hydrophobic tract located between aa 59 and 76 are of major relevance for maintaining the functionality of the 3A protein and preventing its mislocalization into the cell nucleus. 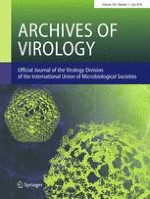 High prevalence of PCV2d in Hunan province, China: a retrospective analysis of samples collected from 2006 to 2016

Co-circulation of multiple genotypes of influenza A (H7N9) viruses in eastern China, 2016-2017

Complete nucleotide sequence of a new carlavirus in chrysanthemums in China