We aimed to investigate reliability and validity of the Turkish version of the Simplified Nutritional Appetite Questionnaire (SNAQ) in geriatric outpatients.

A cross-sectional study was designed through 2013–2016 years. At first, translation and back translation processes of the SNAQ from English to Turkish languages were done consecutively. Then construct validity was performed. Participants: They were recruited among the outpatients aged >=60 years that were consecutively admitted to the geriatric outpatient clinic of the Istanbul University hospital.

442 participants consisted of 305 women and 137 men with a mean age of 77.1 ± 6.8 years. The SNAQ identified 21.5% (n=95) of the participants with poor appetite. Reliability analysis showed good inter-rater reliability (r=0.693, p<0.05) and test-retest stability (r=0.654, p<0.05). Cronbach’s alpha coefficient was 0.522. In terms of construct validity of SNAQ, Cohen’s kappa analysis showed fair to moderate agreement between SNAQ and MNA (κ=0,355, p<0.001). Female gender, being illiterate, functional dependency in IADL were significantly associated with poor appetite. The SNAQ score was weakly correlated with scores of MNA-SF and MNA-LF (r=0.392 and r=0.380, respectively, p<0.0001 for both). There was statistically significantbut negligible correlation between the SNAQ and Katz ADL index, Lawton IADL index, and age.

Turkish version of the SNAQ is a simple measurement with sufficient reliability and validity to screen poor appetite in community-dwelling older adults. 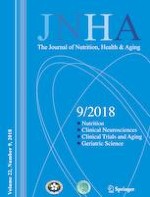 Variability in Repeated Blood Pressure Measurements as a Marker of Frailty

An Innovative Day Hospital Dedicated to Nursing Home Resident: A Descriptive Study of 1306 Residents Referred by Their Physicians