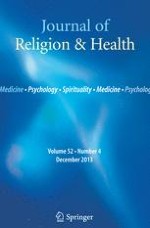 HPV Vaccine Decision-Making and Acceptance: Does Religion Play a Role?

Function(s) of Religion in the Contemporary World: Psychoanalytic Perspectives

The Spiritual Needs and Resources of Hospitalized Primary Care Patients

Gender, Religion, and the Experience of Suffering: A Case Study

The Strength to Cope: Spirituality and Faith in Chronic Disease

What I Look Like: College Women, Body Image, and Spirituality