We undertook a retrospective study to compare the analgesic efficacy and effects on neonatal outcome of administering either remifentanil or fentanyl intravenous patient-controlled analgesia (IVPCA) during labour.

A five-year retrospective cohort study was undertaken of women with more than 24 weeks of gestation who had received either IVPCA remifentanil or fentanyl for labour analgesia at Mount Sinai Hospital. The sampling timeframe was from November 2005 to March 2010. The standard IVPCA regimen for the remifentanil group consisted of a PCA bolus 0.25 μg·kg−1 with a lockout interval of two minutes, a four-hour limit of 3 mg, and a background infusion of 0.025-0.05 μg·kg−1·min−1, whereas the standard IVPCA regimen for the fentanyl group consisted of a PCA bolus 25-50 μg with a lockout interval of three to six minutes and a four-hour limit of 1-1.5 mg. The following data were compared: maternal hourly pain scores (verbal pain score scale 0-10), sedation scores (scale 0-3), adverse effects, and neonatal outcomes. Mixed linear modelling was used to analyze longitudinal data on pain scores over time. The exact Wilcoxon test and the Fisher’s exact test were used for other comparisons.

Ninety-eight women were studied. There was no significant difference in the model-adjusted pain scores between the two groups (P = 0.86). There was a moderate decrease in pain scores in both groups compared with the baseline values. There was no difference in maternal side effects between the two groups, although transient oxygen desaturation was observed more frequently in the remifentanil group than in the fentanyl group (13% vs 2%, respectively; odds ratio, 7.32; 95% confidence interval [CI], 0.85 to 63.3). A larger number of neonates in the fentanyl group required resuscitation compared with neonates in the remifentanil group (59% vs 25%, respectively; odds ratio, 4.33; 95% CI, 1.75 to 10.76); adjusted (44% vs 8%, respectively; odds ratio, 8.56; 95% CI, 2.17 to 33.77).

Intravenous patient-controlled analgesia with either remifentanil or fentanyl provides a moderate degree of labour analgesia, whereas transient maternal oxygen desaturation is observed more commonly with remifentanil. Fentanyl is associated with a higher need for neonatal resuscitation. 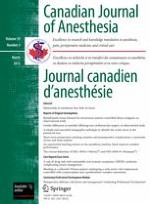 An 8.8-magnitude earthquake in Chile: immediate impact on perioperative services