The aim of the present study was to evaluate the remineralization potential of five dentifrices with different fluoride concentrations. Initial caries lesions were created in 72 cylindrical enamel blocks from deciduous teeth. The specimens were randomly distributed among six experimental groups corresponding to six experimental periods. Each of the six volunteers carried two deciduous enamel specimens fixed in an intraoral appliance for a period of 4 weeks. They brushed their teeth and the enamel blocks at least two times a day with dentifrices containing 0 ppm (period 1), 250 ppm (period 2), and 500 ppm fluoride (period 3), respectively. A second group of volunteers (n = 6) used dentifrices with a fluoride content of 0 ppm (period 4), 1,000 ppm (period 5), or 1,500 ppm (period 6). At the end of the respective period, the mineral content was determined by transversal microradiography (TMR). The use of dentifrices containing 500 ppm fluoride (38% MR), 1,000 ppm fluoride (42% MR), and 1,500 ppm fluoride (42% MR) resulted in a statistically significant higher mineral recovery compared to the control group (0 ppm fluoride). Mineral recovery was similar after use of dentifrices containing 0 and 250 ppm fluoride (24%; 25%). It is concluded that it is possible to remineralize initial carious lesions in deciduous enamel in a similar way as it has been described for enamel of permanent teeth. 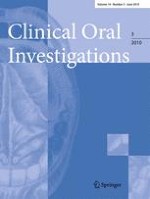 Thickness of softened human enamel removed by toothbrush abrasion: an in vitro study

Effect of mouthrinses on Aggregatibacter actinomycetemcomitans biofilms in a hydrodynamic model