Remitting seronegative symmetrical synovitis with pitting edema (RS3PE) syndrome is characterized by symmetrical synovitis and swelling of both the upper and lower extremities. The anatomical determinant of RS3PE is predominantly extensor tenosynovitis as revealed by magnetic resonance imaging (MRI). Given the cost constraints, time, and expertise required in carrying out MRI and ease in diagnosing tenosynovitis by ultrasound, we utilized high-frequency ultrasonography (USG) for evidence of tenosynovitis of the distal tendons in patients with RS3PE. Diagnosis of tenosynovitis was made on the basis of anechoic or hypoechoic signals around the tendon sheaths in both transverse and longitudinal planes. Flexor and extensor tendons at the wrist and metacarpal heads and extensor digitorum longus (EDL) tendons at the ankle were evaluated with a 7.5–10-MHz linear probe. There were ten patients (seven males) with a mean age of 59.5 years (range: 52–78 years) and mean disease duration of 6.1 months (range: 1.5–12 months). Disease onset was acute in all of the cases. Pitting edema of the hands was present in all except two patients whereas four patients, in addition, had edema of the feet. Edema was symmetrical in seven patients. Inability to make a complete fist was noted in all. Tenosynovitis of extensor and flexor tendons at the wrist and the metacarpal heads was documented in all patients with edema of the hands. In seven cases extensor tendon tenosynovitis was more prominent compared to the flexor tendons. Tenosynovitis of EDL tendons was detected in six cases. Dramatic relief with low-dose prednisolone was noted in all patients within 6 weeks of therapy. At a mean follow-up of 10.1 months all patients had marked relief in edema of extremities and improvement in the grip strength. Our study confirms that tenosynovitis of both flexor and extensor tendons at the wrist and extensor tendons of the feet is the hallmark of RS3PE syndrome. USG is a reliable and cost-effective modality for evaluation of patients with suspected RS3PE. 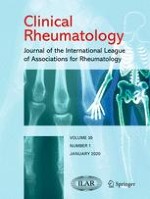 Patients’ awareness, utilization, and satisfaction with treatment modalities for the management of their osteoarthritis

Neridronate and human osteoblasts in normal, osteoporotic and osteoarthritic subjects

Osteopoikilosis in an ancient skeleton: more than a medical curiosity