To evaluate the effects of cervical artificial disc replacement (ADR) and anterior discectomy and fusion (ACDF) on adjacent spinal alignments.

The cohort consisted of 33 patients who undergone single-level cervical ADR (15 patients) and ACDF (18 patients) for radiculopathy, who had not had any previous spine surgery, and who had a minimum follow-up of 2 years. Whole-spine lateral radiographs were taken at the pre-operative and follow-up consultations. Cervical lordosis, thoracic kyphosis, lumbar lordosis, and sagittal balance were measured each time. The patients filled out pre-operative and follow-up functional evaluation forms including visual analogue scale (VAS) of neck and arm. The mean follow-up durations of patients who had cervical ADR and ACDF were 28 ± 5.0 and 30 ± 5.8 months, respectively. The patients having ACDF had the higher mean age (53 ± 9.0 years) than that of patients with cervical ADR (45 ± 11.7 years).

The cervical lordosis and thoracic kyphosis in cervical ADR group increased significantly more than those of the ACDF group in follow-up assessment (P = 0.011 and 0.012). There was no significant change of lumbar lordosis in intra- and inter-group analyses. The follow-up sagittal balances for the cervical ADR and ACDF groups moved towards a neutral value. Although the follow-up neck and arm VAS of the both groups improved than those of the pre-operative status, the groups did not differ significantly except for a difference in neck VAS, which improved more after ADR. 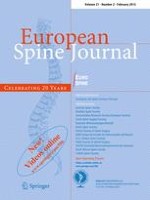 Direct repair of displaced anterior arch fracture of the atlas under microendoscopy: experience with seven patients

Computed tomography for the diagnosis of lumbar spinal pathology in adult patients with low back pain or sciatica: a diagnostic systematic review