Spontaneous parenchymal hemorrhage of term neonates is usually asymptomatic and does not require surgical intervention. However, there is no consensus on the management of cases with severe life-threatening symptoms, including repeated apnea, respiratory failure with severe cyanosis, severe bradycardia, or uncontrolled seizures.

Our medical records of term neonates with intracranial hemorrhage who underwent surgical intervention were retrospectively reviewed. There were two cases with spontaneous parenchymal hemorrhage. Both cases were delivered vaginally without any use of forceps or vacuum devices. Neither of them showed asphyxia, hypoxic-ischemic encephalopathy, hematological abnormalities, congenital vascular anomalies, infection, or birth trauma. Common symptoms included apnea, cyanosis, bradycardia, and decreased consciousness. The original location of bleeding was the parenchyma of the right temporal lobe. The hemorrhage extended to subdural spaces in both cases. Subdural hematoma (SDH) removal was performed without manipulating the parenchymal hematoma. Only a small amount of SDH (approximately 5 ml) was drained spontaneously with irrigation, which was sufficient to decrease the elevated intracranial pressure. The patients’ respiratory conditions improved dramatically after the surgery.

We propose that removing only a small amount of SDH would be effective and sufficient to relieve severe symptoms of increased intracranial pressure in term neonates with massive spontaneous parenchymal hemorrhage. 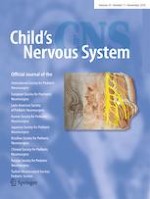