Renal failure due to tubulointerstitial nephropathy in an infant with cranioectodermal dysplasia | springermedizin.de Skip to main content
TOOLBAR 1 2 3 4
SUCHE MENÜ 1 2 3 4

Cranioectodermal dysplasia (CED) is a rare autosomal recessive disease with characteristic craniofacial, skeletal, and ectodermal-derived tissue abnormalities. In this disease, tubulointerstitial nephropathy (TIN) has been reported as one of the life-threatening combinations. Here we report a sporadic case of CED showing signs of renal failure during the perinatal period. Renal biopsy at the age of 6 months revealed TIN consisting of marked interstitial fibrosis with inflammatory cell infiltration accompanied by scattered tubular atrophy. Glomeruli were often sclerosed and others showed prominent immaturity; the findings are supportive of progressive deterioration of renal function in this infant. This case suggests that TIN in CED can occur during the fetal period and progress rapidly, leading to end-stage renal failure in infancy. 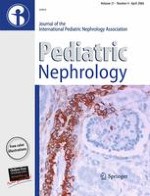