Females remain under-represented in academic anesthesiology. Our objectives were to investigate gender differences over time in the first and last authors of published articles as well as corresponding citation rates in the Canadian Journal of Anesthesia (CJA).

We conducted a cross-sectional, retrospective analysis of first and last authors’ gender from editorials and original articles published in the CJA in a sample of one calendar year of each decade between 1954 to 2017. We analyzed the relationships between author gender, year of publication, article type, and number of citations.

Our study shows that, despite a slow increase over time, female authors are under-represented relative to male authors in the CJA and relative to the changing demographics of anesthesiologists in Canada. The reasons for this disparity are multifactorial and further research is needed to identify effective solutions. 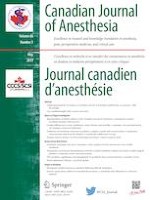 The incidence, significance, and management of accidental intra-arterial injection: a narrative review

Anesthetic technique and cancer outcomes: a meta-analysis of total intravenous versus volatile anesthesia

Correction to: Carfentanil: a narrative review of its pharmacology and public health concerns