Response rates and characteristics of recruitment procedures from feasibility studies for a large cohort study conducted in 2011 were analyzed.

Among 1,235 participants the proportion of recruited individuals with a foreign background was 17.3 % (95 % confidence interval 15.3–19.5 %), significantly lower than in the sampling frame (23.1 %). The difference between observed and expected proportion was high among individuals with Turkish background and smaller among ethnic Germans from the Former Soviet Union and other foreign background groups. Common recruitment strategies to increase the response had positive effects in all groups. For the planned recruitment strategy in the forthcoming German National Cohort, we estimate an overall response of approximately 50 %.

Individuals with Turkish background may need particular efforts to be adequately represented in a population-based cohort in Germany. Other foreign background groups are relatively well represented using standard procedures. An adequate response can be obtained under carefully planned recruitment strategies. 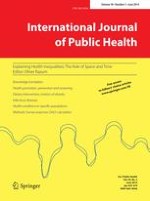 Practices and opinions regarding HPV vaccination among French general practitioners: evaluation through two cross-sectional studies in 2007 and 2010

Health conditions in regions of Eastern and Western Europe