Nitroglycerin is commonly used as an antispasmodic for treating spasm of coronary artery bypass grafts. This study investigated whether the presence of renal failure affects reactivity to nitroglycerin in internal thoracic arteries obtained from patients undergoing coronary bypass surgery. The patients were divided into three groups according to estimated glomerular filtration rate (eGFR, mL/min/1.73 m2): without renal failure (60 ≤ eGFR, n = 13), with moderate renal failure (30 ≤ eGFR < 60, n = 10), and with severe renal failure (eGFR < 30, n = 10). Organ chamber technique was used to evaluate concentration-related responses of isolated internal thoracic arteries to vasodilators. Nitroglycerin induced a concentration-dependent relaxation, which was significantly augmented in patients with severe but not moderate renal failure than in those without renal failure. In addition, there was a negative correlation between eGFR and the relaxant efficacy of nitroglycerin (P = 0.016). On the other hand, relaxant responses to BAY 60-2770 (which enhances cGMP generation as with nitroglycerin) were similar among three grades of renal function. An inverse relationship of eGFR to the relaxant efficacy of BAY 60-2770 was not observed, either (P = 0.314). These findings suggest that severe renal failure specifically potentiates nitroglycerin-induced relaxation in internal thoracic artery grafts. 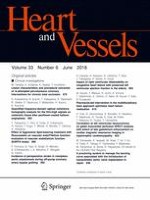 Ankle–brachial pressure index as a predictor of the 2-year outcome after transcatheter aortic valve replacement: data from the Japanese OCEAN-TAVI Registry