Restrictive dermopathy (RD) belongs to the laminopathies and mostly shows an autosomal recessive heredity pattern. This rare genetic disorder is lethal for the newborn in the neonatal period. Clinical and pathological findings are distinctive and allow for a specific diagnosis in most cases. Furthermore, polyhydramnios, decreased foetal movement, facial dysmorphisms and arthrogryposis are characteristic of RD. Respiratory insufficiency leads to an early neonatal death.

We present the case of an affected infant and a review of the previously reported cases in the literature.

The infant showed thin, shiny skin with exfoliating desquamation, a small, round and open mouth, low-set ears, a small pinched nose, joint contractures at all four extremities and distinctive pulmonic atelectasis. It died 3 h and 20 min post-partum. Histologically, the skin showed the typical pattern of an RD with the epidermis covered by an exfoliated, hyperkeratotic horn layer, clearly hypoplastic hair follicles and a considerably reduced dermis thickness, although it had a massive subcutaneous adipose tissue. Electron microscopically, the diagnosis was confirmed.

It is important to know about this disease and to distinguish it from others like keratinization malfunctions such as ichtyosis, congenital, developmental and akinesia disturbance, etc., to know the prognosis for the affected newborn and to provide sufficient (genetic) counselling to the families. This disorder is caused by dominant mutations of the LMNA (primary laminopathy) or recessive mutations of the ZMPSTE24 (FACE1) (secondary laminopathy) genes. 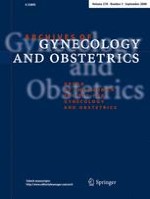 Lipoadenofibroma of the endometrium: a rare variant of benign mullerian mixed tumor

Quality of life and acute toxicity of radiotherapy in women with gynecologic cancer: a prospective longitudinal study