Results after skin traction for femur shaft fractures in children below the age of four years | springermedizin.de Skip to main content
SUCHE MENÜ 1 2 3 4

Nonsurgical management has been identified as the treatment of choice for femoral shaft fractures in children below four years of age. For various reasons, the surgical approach has become increasingly popular in recent years. The aim of this study is to report results after vertical skin traction and analyze the benefits of this technique as well as to point out advantages compared with surgery in this age group.

The authors performed a retrospective data analysis, including all patients with femoral shaft fractures below the age of four who were treated with vertical skin traction at our institution between January 2006 and December 2016.

Skin traction for a femoral shaft fracture was performed for 36 patients (mean age 1.6 years; 1 day–3.5 years). The mean duration of traction was 18.5 days (14–30). Complications included soft tissue affections (n = 5), which all healed spontaneously. Consolidation was observed in all fractures. Initial axial deviations and shortening did not change during traction until consolidation (p > 0.05), and no relevant torsion deformity occurred (p = 0.01). Patients gained full weight-bearing within 12.3 days (7–40) following end of traction. At the final follow-up, after a mean of 29.3 months (12–192), leg-length discrepancy (mean 7.1 mm; 5–20) was found on radiograms in nine cases, and axial deviations (mean 7.7°; 5–25) were documented in seven cases. None of the patients had limitations in daily activities or sports.

Skin traction is a technically easy, safe, and non-invasive treatment modality for femoral shaft fractures in children below the age of four years. Strong results are obtained benefited from a high potential of growth-related correction, and in principle no anesthesia is needed. A prolonged hospitalization and socio-economic factors maintain the ongoing debate in comparison with the surgical approach.

Fractures of the femoral shaft account for 0.7–1.7% of all pediatric fractures and 3.5% of long-bone extremity fractures in children [1, 2]. These fractures occur in every age group with an average age at injury of 6.3 years old, and injury mechanisms are mostly age-dependent, ranging from trivial falls at home to high-velocity accidents [3, 4]. In general, the treatment for femoral shaft fractures depends on factors, such as the age, size, and weight of the patient, fracture type, soft tissue integrity, concurrent injuries, family preference, and surgeon preference [5, 6]. For younger children (below 4–5 years old), predominantly conservative management is described, and satisfactory results have been obtained throughout [1, 5, 7, 8]. Some authors note that even though the overwhelming majority of pediatric patients with femoral shaft fractures are expected to heal with normal function and radiographic alignment, minor sequelae of leg-length discrepancy, torsion and angular deformity, and back pain are often described [9, 10]. Other authors state that angulation and overlap or shortening tend to correct with remodeling, especially in younger children [7]. However, there is an increasing shift toward surgical therapy [11], which can be explained by various socio-economic factors [12‐15]. Nevertheless, there currently is no consensus on the best method of managing femoral shaft fractures in younger children.
The aim of this study is to analyze the implementation and results after skin traction for femoral shaft fractures in children below four years of age at a single-center institution.
Anzeige

This study retrospectively analyzed all patients below the age of four undergoing skin traction for femoral shaft fractures at our institution between January 2006 and December 2016. The study was approved by the local ethical committee (011/2018BO2). Data on demographic characteristics, fracture type, and extent of dislocation, implementation of skin traction, hospital stay, complications, and outcomes were all collected from hospital records and stored on a computerized database. Fractures were classified according to the AO Pediatric Comprehensive Classification of Long-Bone Fractures [16]. Data were acquired and processed according to the latest version of the World Medical Association Declaration of Helsinki—Ethical Principles for Medical Research Involving Human Subjects.
Vertical skin traction was performed according to the department's protocol in children below the age of three years or with a bodyweight below 15 kg. The duration of traction was three weeks, while it was two weeks for birth-related fractures. Therapy was performed with a traction device attached to a hospital bed. In all patients, a weight with 1/6 of the patient’s bodyweight was fixed to each leg via a spring-loaded pulley off the side of the bed. To prevent malrotation, the bed stretcher was equipped with additional slings pulling headwards (Fig. 1). After 48–72 h of traction, when children are adapted and relaxed, X-rays in two planes of the femur were performed. Eventually either the direction of traction or the weight was modified to optimize alignment. All patients received daily conscientious observation for soft tissue erosions, tension blisters, and an unimpaired peripheral circulation, motor function, and sensitivity. At the end of treatment, an X-ray was performed to ensure consolidation. After discharge, all patients were encouraged to regain their mobility individually under the guidance of their parents. Follow-up in the outpatient clinic was continued for at least 12 months and until no restrictions were reported. Each patient was examined for abnormalities in gait, leg-length discrepancies, and torsion and angular deformities of the affected limb. Conventional X-rays were performed to document the growth-related correction of angular deformities; standing roentgenograms were used to determine leg-length discrepancies. The extent of fracture displacement at trauma, at consolidation, and at the last follow-up were documented and statistically compared.
×

For 36 patients (mean age 1.6 years; 1 day–3.5 years) between January 2006 and December 2016, skin traction for 30 spiral/oblique (AO 32-D/5.1) and 6 transvers femoral shaft fractures (32-D/4.1) were performed. Table 1 shows demographic and clinical data of all patients. Traction was applied in analgosedation (n = 18), after the administration of peripheral analgesics (n = 14), or in general anesthesia (n = 4). General anesthesia was chosen if the treating surgeon aimed to perform a reduction or if analgosedation was not sufficient. The mean duration of traction was 18.5 days (14–30). Complications included soft tissue affections (n = 5), which all healed spontaneously. Consolidation was observed in all fractures. Comparing the extent of dislocation at the time point of trauma on conventional X-rays with the time point of consolidation, there was no difference (Table 2). This applies to all axial deviations as well as leg shortenings. Only clinically evident torsion deformities at the time point of trauma were corrected through vertical traction and could no longer be detected at the time point of consolidation (p = 0.01).
Table 1
Demographic and clinical data of 36 patients who underwent skin traction for a femoral shaft fracture at the institution from January 2006 to December 2016
Table 2
The extent of fracture displacement in 36 patients with a fracture of the femoral shaft at the time point of injury compared with the extent of fracture displacement at the time point of consolidation and termination of skin traction
p < 0.05 was considered statistically significant
Anzeige
After discharge, patients received follow-up care in the outpatient clinic. Newborns (n = 6) and patients with comorbidities (n = 3) were excluded from selected examinations. The remaining patients gained full weight-bearing within 12.3 days (7–40). At the last follow-up, after a mean of 29.3 months (12–192), leg-length discrepancy (mean 7.1 mm; 4–10) was found on X-rays in nine cases. Upon clinical examination, leg-length discrepancy (mean 9.6 mm; 5–20) was found only in three cases. These patients had temporary insole support to offer leg-length compensation until no more complaints were mentioned. Axial deviations measured through X-rays (mean 7.7°; 5–25) were documented in seven cases. At the last follow-up, no restrictions on daily activities or limitations during sports were reported.

Skin traction is a technically easy, safe, and non-invasive treatment modality for femoral shaft fractures in children below the age of four years. Strong results are obtained due to a high potential of growth-related correction, and in principle, no anesthesia is needed for this technique. A prolonged hospitalization and socio-economic factors maintain the ongoing debate in comparison with the surgical approach.

The authors have no conflicts of interest or financial ties to disclose.
Anzeige 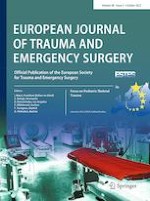 Gunshot and stab wounds in France: descriptive study from a national trauma registry

Factors associated with dislocation after bipolar hemiarthroplasty through an (antero-)lateral approach in elderly patients with a femoral neck fracture: a retrospective cohort study with a nested case–control subanalysis of radiographic parameters