The online version of this article (doi:10.​1007/​s12094-016-1598-6) contains supplementary material, which is available to authorized users.
This study has previously been presented in part at the 20th Scientific Meeting of the Society of Neuro-Oncology, San Antonio, Texas—November 2015.
J. Capellades and C. Balana contributed equally to the study.

We assessed agreement among neurosurgeons on surgical approaches to individual glioblastoma patients and between their approach and those recommended by the topographical staging system described by Shinoda.

Five neurosurgeons were provided with pre-surgical MRIs of 76 patients. They selected the surgical approach [biopsy, partial resection, or gross total resection (GTR)] that they would recommend for each patient. They were blinded to each other’s response and they were told that patients were younger than 50 years old and without symptoms. Three neuroradiologists classified each case according to the Shinoda staging system.

Biopsy was recommended in 35.5–82.9%, partial resection in 6.6–32.9%, and GTR in 3.9–31.6% of cases. Agreement among their responses was fair (global kappa = 0.28). Nineteen patients were classified as stage I, 14 as stage II, and 43 as stage III. Agreement between the neurosurgeons and the recommendations of the staging system was poor for stage I (kappa = 0.14) and stage II (kappa = 0.02) and fair for stage III patients (kappa = 0.29). An individual analysis revealed that in contrast to the Shinoda system, neurosurgeons took into account T2/FLAIR sequences and gave greater weight to the involvement of eloquent areas.

The surgical approach to glioblastoma is highly variable. A staging system could be used to examine the impact of extent of resection, monitor post-operative complications, and stratify patients in clinical trials. Our findings suggest that the Shinoda staging system could be improved by including T2/FLAIR sequences and a more adequate weighting of eloquent areas. 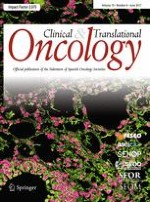 Nasopharyngeal carcinoma: 30-year experience of a single institution in a non-endemic area

Impact of clinicopathological parameters on survival after multiorgan resection among patients with T4 gastric carcinoma: a systematic review and meta-analysis