Clinical and functional data of 123 patients were retrospectively analyzed. All patients had symptoms of obstructed defecation before surgery and had rectocele and/or intussusception. Of them, 85 were operated on by the authors and 38 were referred after stapled transanal rectal resection had been performed elsewhere.

At a median follow-up of 17 (range, 3–44) months, 65 percent of the patients operated on by the authors had subjective improvement. Recurrent rectocele was present in 29 percent and recurrent intussusception was present in 28 percent of patients. At univariate analysis, results were worse in those with preoperative digitation (P < 0.01), puborectalis dyssynergia (P < 0.05), enterocele (P < 0.05), larger size rectocele (P < 0.05), lower bowel frequency (P < 0.05), and sense of incomplete evacuation (P < 0.05). Bleeding was the most common perioperative complication occurring in 12 percent of cases. Reoperations were needed in 16 patients (19 percent): 9 for recurrent disease. In the 38 patients referred after stapled transanal rectal resection, the most common problems were perineal pain (53 percent), constipation with recurrent rectocele and/or intussusception (50 percent), and incontinence (28 percent). Of these patients, 14 (37 percent) underwent reoperations: 7 for recurrence. Three patients presented with a rectovaginal fistula. One other patient died for necrotizing pelvic fasciitis. 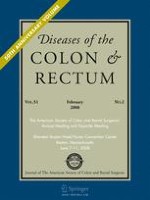 Neoplasms of the Colon, Rectum, and Anus. 2nd edition.

The Impact of Splenectomy on Outcome After Resection for Colorectal Cancer: A Multicenter, Nested, Paired Cohort Study

Prolapse and Hemorrhoids: Advances and Insights in Treatment