CABP4-related retinal dysfunction is a cone–rod synaptic transmission disorder with electronegative electroretinogram (ERG) waveform. It is a rare retinal dysfunction that can be classified into the incomplete form of congenital stationary night blindness. Absent foveal reflex and overall foveal thinning were previously reported, but in most cases the fundus appearance was described as nearly normal. We report here peculiar macular changes in a patient of French ancestry harbouring CABP4 mutations.

Initial presentation was misleading with Leber congenital amaurosis. The electronegative ERG waveform reoriented the genetic investigations and thus establishing a correct diagnosis. To the best of our knowledge, the peculiar fundus changes observed in our patient were never reported before. We hypothesized that a foveal ellipsoid zone interruption discovered in our patient could reflect mostly a cone dysfunction. It was unclear whether the fine radial folds in both maculae were linked with high hyperopia or were an intrinsic feature of the retinal disease. 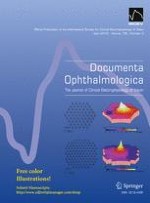