Complete tumor resection is the mainstay of treatment for retroperitoneal sarcoma (RPS), but the size and quality of surgical margins for radical resection in RPS are unknown. They are believed to be pushing tumors, but recently, aggressive surgical policies leading to multivisceral resection have seemed to suggest better local control compared with simple tumor resection. We analyzed a single-institution series of RPS to provide information useful to surgical decision-making.

From 1996 to 2008, 77 patients referred to our institution underwent surgery for primary RPS. Thirty tumors were classified as liposarcoma, and 20 as leiomyosarcoma. Potential prognostic factors were tested retrospectively. Number and pathologic status of resected organs were assessed.

This series, in which an aggressive surgical policy was adopted along with extensive pathologic sampling, shows that RPS has a high rate of viscera infiltration. This growth pattern is characteristic of well-differentiated liposarcoma too. These pathologic data should be considered when planning surgical strategy. 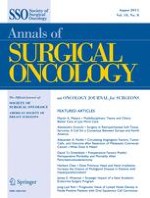 Surgery in Retroperitoneal Soft Tissue Sarcoma: A Call for a Consensus Between Europe and North America

Special Certification for General Surgical Oncology: Concerns of a Curmudgeon