Patients’ adherence to and persistence on treatment for inflammatory bowel disease (IBD) can vary, depending on type and distribution of disease and treatment modality. We aim to identify differences in adherence and persistence with treatments with different administration routes (intravenous vs oral) in IBD.

We describe a novel adjustment method for interdisease treatment differences using infliximab treatment patterns to bridge differences between IBD and RA. After adjustment, adherence was higher with infusions than oral medications, which may affect outcomes. Indirect comparisons between vedolizumab and tofacitinib are not generalizable and should be confirmed in tofacitinib-treated IBD patients. 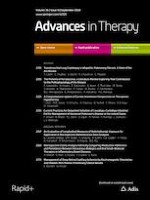 Evaluating the Effects of an Ophthalmic Solution of Coenzyme Q10 and Vitamin E in Open-Angle Glaucoma Patients: A Study Protocol

Transbronchial Lung Cryobiopsy in Idiopathic Pulmonary Fibrosis: A State of the Art Review

Assessment of Risk of Disease Progression in Pulmonary Arterial Hypertension: Insights from an International Survey of Clinical Practice