As with other open procedures now routinely performed using laparoscopy, minimally invasive pancreaticoduodenectomy (MIPD) may result in decreased pain, fewer wound complications, and accelerated recovery. However, when used for periampullary cancers, it is also important to assess if MIPD offers comparable oncologic outcomes.

Technical and perioperative outcomes were compared between patients with a preoperative diagnosis of periampullary neoplasm offered MIPD or open pancreaticoduodenectomy (OPD) from November 2009 to July 2011.

Fifty-six consecutive MIPD and OPD (28 each) procedures were analyzed. Comparing MIPD to OPD, significant differences included longer median procedure time (431 vs 410 min, p = .04) and fewer median lymph nodes harvested (15 vs 20, p = .04). R0 resection rate tended to be lower (63 vs 88 %, p = .07) as well as surgical site infections (18 vs 43 %, p = .08). Clinically significant pancreatic fistula rate was the same between groups (21 %). Other outcomes such as narcotic pain medication use, length of stay, and 30-day readmission rates were also similar.

MIPD is feasible with comparable technical success and outcomes to OPD. However, there is a learning curve to the procedure and further experience and prospective study will be required to better establish the oncologic efficacy of MIPD to open resection. 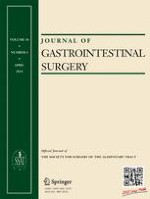 A Technique for the Laparoscopic Repair of Paraoesophageal Hernia Without Mesh

Erratum to: Defining Incidence and Risk Factors of Venous Thromboembolism after Hepatectomy

The Postresection Alpha-Fetoprotein in Cirrhotic Patients with Hepatocellular Carcinoma. An Independent Predictor of Outcome