The aim of the present study is to identify risk factors for development and predictors of mortality of candidaemia among critically ill patients.

A 1:7 case–control study was conducted during a 4-year period (2012–2015) in a Greek Intensive Care Unit (ICU). Candidaemia was confirmed by positive blood cultures. All yeasts were identified using API 20C AUX System or Vitek 2 Advanced Expert System. Epidemiologic data were collected from the ICU computerized database and patients’ chart reviews.

Fifty-three patients developed candidaemia with non-albicans species being the predominant ones (33 patients, 62.3%). Multivariate analysis found that prior emergency surgery, malignancy, hospitalization during summer months, prior septic shock by KPC-producing Klebsiella pneumoniae and number of antibiotics administered were independently associated with candidaemia, while, prior administration of azole was a protective factor. Non-albicans candidaemia was associated with number of antibiotics administered and prior administration of echinocandin. Mortality of 14 days was 28.3% (15 patients) and was associated with SOFA score upon infection onset and septic shock, while, appropriate empirical antifungal treatment was associated with better survival. 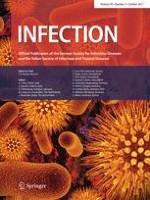 Can a collaborative subspecialty antimicrobial stewardship intervention have lasting effects?

Human infectious diseases and risk of preeclampsia: an updated review of the literature