Atypical meningioma (AM) has a high rate of local recurrence after surgery, and the role of adjuvant radiotherapy in AM remains controversial. We analysed progression-free survival (PFS) and identified the factors associated with postoperative recurrence in AM patients.

Data were obtained from 263 AM patients who underwent surgery at our institution between October 2009 and September 2018. Analyses included factors such as the extent of surgical resection, MIB-1 labelling index, brain invasion and therapy modality. Univariate and multivariate analyses were used to assess recurrence-related prognostic factors. 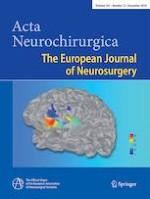 Recurrence or neurological loss? Resection mode selection for patients with large sacral chordoma: an analysis of prognostic factors and quality of life

Letter to the editor - Neurosurgery general

Letter to the editor Re: Standardized assessment of outcome and complications in chronic subdural hematoma: results from a large case series by Bucher B et al.

How I Do it - Neurosurgical Anatomy

How I do it: extradural clinoidectomy