To review the incidence of significant bleeding complications after ultrasound-guided percutaneous core native renal biopsies at a single center using a standardized technique.

A retrospective review of ultrasound (US)-guided percutaneous native renal core biopsies done at our institution from September 2005 to December 2015 was performed. Demographic and clinical data were collected at the time of biopsy, with additional clinical information recorded 24 h and 3 months after the biopsy. Bleeding complications were defined using the Common Terminology Criteria for Adverse Events (CTCAE, version 4.0) created by the National Institutes of Health.

2204 US-guided native renal core biopsies were performed during the study period, with 37 hemorrhages (1.64%) that were CTCAE grade 3 or higher. The rate of inadequate sampling as reported by pathology was extremely low (1.1%). Factors demonstrating a significant association with bleeding risk included estimated glomerular filtration rate (eGFR), specifically when the eGFR was less than 60 (p = 0.025), platelet count (p = 0.002), including a statistically significant decreased risk of bleeding with a platelet count greater than 100 (109/L) (p = <0.001), and performing four or more needle passes (p = 0.012). While female gender was also associated with an increased bleeding risk (p = 0.05), there was a significant association between females with a BMI ≥ 25 and a decreased bleeding risk (0.034). No statistically significant association between post-biopsy hemorrhage and aspirin use within 10 days prior to biopsy or a prior diagnosis of amyloidosis was demonstrated.

US-guided native renal biopsy is a safe procedure with a low rate of significant bleeding complications and a high tissue adequacy rate using an 18-gage spring-loaded biopsy device. Factors associated with increased bleeding risk include female gender, lower platelet counts, decreased eGFR and performing four or more needle passes, which has not been reported previously. Interestingly, females with a BMI ≥ to 25 demonstrated a decreased bleeding risk, and aspirin (81 mg or 325 mg) within 10 days of the procedure did not demonstrate a significant effect. While not shown in this current study, the relationship of very recent aspirin therapy with bleeding is yet to be defined. Similarly, the statistically significant decreased risk of bleeding complications in overweight or obese females requires further investigation. 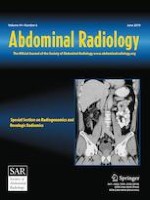 An imaging-based review of systemic therapies and associated toxicities in metastatic pancreatic cancer as per the 2018 ASCO guidelines: what every radiologist should know

Focused CT for the evaluation of suspected appendicitis