Vancomycin-Resistant Enterococci (VRE) are important causes of Intensive Care Unit (ICU) infections. Our goal was to identify the prevalence and risk factors for VRE colonization upon ICU admission and during ICU stay, as well as, their impact in enterococcal infection including vancomycin-susceptible cases (VSE).

A prospective study regarding patients admitted in ICU (n = 497) was conducted during a 24-month period. Rectal swabs were collected upon admission and during hospitalization and inoculated onto selective medium. Enterococci were phenotypically characterized. van genes were investigated by PCR and clones were identified by Pulsed-Field Gel Electrophoresis and Multilocus Sequence Typing. Epidemiologic data were collected from the ICU database. 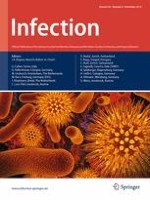 Risk factor for death in hematopoietic stem cell transplantation: are biomarkers useful to foresee the prognosis in this population of patients?

Fatal Strongyloides hyper-infection in a patient with myasthenia gravis

Acinetobacter junii as an aetiological agent of corneal ulcer