The purpose of this study was to determine the risk factors for paraaortic lymph node (LN) metastasis in endometrial cancer (EC) patients who underwent comprehensive surgical staging.

A total of 641 women with EC (endometrioid, non-endometrioid, or mixed histology) who underwent comprehensive surgical staging including pelvic and paraaortic LN dissection between 2008 and 2016 were included in this retrospective study. Patient data were analyzed with respect to paraaortic LN involvement, and predictive factors for paraaortic LN metastasis were investigated.

The presence of LVSI and pelvic LN involvement appear to be independent risk factors for paraaortic LN metastasis in patients with EC. LVSI may be considered as a routine pathological parameter during frozen section analysis in women with EC undergoing surgery. 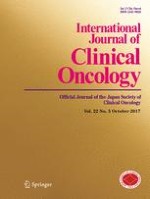 Erratum to: Sarcopenia, but not visceral fat amount, is a risk factor of postoperative complications after major hepatectomy