Although papillary carcinoma usually shows mild characteristics, it metastasizes and shows recurrence to the lymph node in high incidences. Of the two representative lymph node compartments to which papillary carcinoma metastasizes, the central compartment can be routinely dissected via the surgical incision made for thyroidectomy. However, the routine application of prophylactic lateral node dissection (modified radical neck dissection [MND]) remains controversial. In this study, we investigated risk factors for lymph node recurrence of papillary carcinoma to determine the appropriate application of prophylactic MND.

We investigated risk factors for lymph node recurrence in 1,231 patients without preoperatively detectable lateral node metastasis who underwent thyroidectomy, central node dissection, and prophylactic MND for papillary carcinoma between 1987 and 1995.

The incidence of lateral node metastasis and the number of metastatic lateral nodes significantly increased with carcinoma size. The lymph node disease-free survival (LN-DFS) was also significantly worse in carcinoma with a maximal diameter greater than 3 cm. Massive extrathyroid extension, male gender, and age 55 years or older also reflected a poorer LN-DFS. The 10-year LN-DFS rates of patients with carcinoma having two and three or four of these features were low at 88.5% and 64.7%, respectively, although the rates of those with carcinoma having no or only one characteristic were better than 95%. 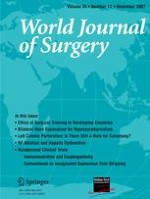 Efficacy and Safety of Seprafilm for Preventing Postoperative Abdominal Adhesion

Principles and Practice of Surgery for the Colon, Rectum, and Anus. By Philip H.Gordon and Santhat Nivatvongs

Malaria: Who Is at Fault?

Liver Volumetry Plug and Play: Do It Yourself with ImageJ