Vasopressin is one of the vasopressors used to augment blood pressure in subarachnoid hemorrhage (SAH) patients with clinically significant vasospasm. The purpose of the present study was to determine whether the administration of vasopressin to a population of SAH patients was an independent predictor of developing hyponatremia.

A retrospective review on the health records of 106 patients admitted to the University of Alberta Hospital Neurosciences ICU, Edmonton AB, Canada, with SAH from June 2013 to December 2015 was conducted. Serum sodium changes in patients receiving vasoactive drugs were compared. In addition, independent predictors for hyponatremia (Na < 135 mmol/L) were determined using a multivariate logistic regression model. 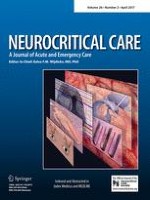