Observational, prospective, single-center study. Patients referred for surgery due to primary rhegmatogenous retinal detachment with the macula on between 2009 and 2013 were included. Relevant factors analyzed included age, time delay until surgery, lens status, myopia, the detachment’s location and configuration as well as number, size and type of retinal breaks. Eyes underwent optical coherence tomography to detect macular detachment. A multivariate analysis was performed to investigate the effect of several factors in the progression of retinal detachment.

A total of 116 eyes of 116 patients were included. Mean time delay between admission and surgery was 1.8 ± 1.4 days. Progression was observed in 19.8% of the eyes. Of those, 47.8% presented macular detachment. Ten of the 11 (90.9%) eyes presenting progression involving the macula also exhibited a bullous configuration, which was the only parameter that correlated significantly with detachment progression in patients with (p = 0.0036) and without (p = 0.0014) macular involvement.

For the first time in a prospective trial, a bullous configuration was found to be a highly significant predictor for progression in macula-on detachments. Our data support prompt surgery in patients diagnosed with bullous macula-on RRD.
Anzeige 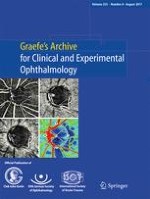 Intracameral cefuroxime in the prevention of postoperative endophthalmitis

Retinal microstructures are altered in patients with idiopathic infantile nystagmus