The first consecutive 30 Xi-RobTME were compared with a Si-RobTME control group of 30 patients, selected using a one-to-one case-matched methodology from our prospectively collected Institutional database, comprising all cases performed between April 2010 and September 2016 by a single surgeon. Perioperative outcomes were compared. The impact of minimally invasive TME on autonomic function and quality of life was analyzed with specific questionnaires.

The technical advantages offered by the da Vinci Xi seem to be mainly associated with a shorter docking and operative time and with superior ability to perform a fully-robotic approach. Clinical and functional outcomes seem not to be improved, with the introduction of the new Xi platform. 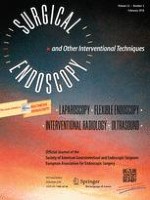 Impact of laparoscopy on the prevention of pulmonary complications after thoracoscopic esophagectomy using data from JCOG0502: a prospective multicenter study