The role of the da Vinci Robotic System ® in adrenal gland surgery is not yet well defined. The goal of this study was to compare robotic-assisted surgery with pure laparoscopic surgery in a single center.

One hundred and 16 patients underwent minimally invasive adrenalectomies in our department between June 1994 and December 2014, 41 of whom were treated with a robotic-assisted approach (robotic adrenalectomy, RA). Patients who underwent RA were matched according to BMI, age, gender, and nodule dimensions, and compared with 41 patients who had undergone laparoscopic adrenalectomies (LA). Statistical analysis was performed using the Student’s t test for independent samples, and the relationship between the operative time and other covariates were evaluated with a multivariable linear regression model. P < 0.05 was considered significant.

In our experience, RA shows potential benefits compared to classic LA, in particular on patients with nodules ≥6 cm, BMI ≥ 30 kg/m2, and with previous abdominal surgery.
Anzeige 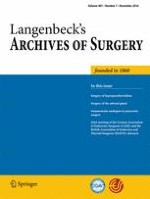 Use of PET tracers for parathyroid localization: a systematic review and meta-analysis