The differences between the costs of robotic rectal resection and of the laparoscopic approach are still not well known. The aim of this study was to evaluate the cost-effectiveness of robotic versus laparoscopic surgery.

We conducted an observational, comparative, prospective, non-randomized study on patients having laparoscopic and robotic rectal resection between February 2014 and March 2018 at the Sanchinarro University Hospital, Madrid. Outcome parameters included surgical and post-operative costs, quality adjusted life years (QALY) and incremental cost per QALY gained or the incremental cost effectiveness ratio (ICER). The primary endpoint was to compare cost effectiveness in the robotic and laparoscopic surgery groups. A willingness-to-pay of 20,000€ and 30,000€ per QALY was used as a threshold to determine the most cost-effective treatment.

Our data regarding the cost-effectiveness of RRR versus LRR shows a benefit for RRR. 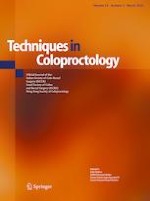 A protocol for skin closure after stoma reversal