Minimally invasive pancreaticoduodenectomy (PD) remains one of the most challenging abdominal procedures, and its application is poorly reported in the literature so far. To date, few data are available comparing a minimally invasive approach to open PD. The aim of the present study is to compare the robotic and open approaches for PD at a single institution.

Data from 83 consecutive PD procedures performed between January 2002 and May 2010 at a single institution were retrospectively reviewed. Patients were stratified into two groups: the open group (n = 39; 47%) and the robotic group (n = 44; 53%).

The authors present one of the first studies comparing open and robotic PD. While it is too early to draw definitive conclusions concerning the long-term outcomes, short-term results show a positive trend in favor of the robotic approach without compromising the oncological principles associated with the open approach. 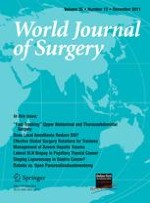