To study how rod- and cone-driven responses depend on stimulus size in normal subjects and patients with retinitis pigmentosa (RP), and to show that comparisons between responses to full-field (FF) and smaller stimuli can be useful in diagnosing and monitoring disorders of the peripheral retina without the need for lengthy dark adaptation periods.

The triple silent substitution technique was used to isolate L-cone-, M-cone- and rod-driven ERGs with 19, 18 and 33% photoreceptor contrasts, respectively, under identical mean luminance conditions. Experiments were conducted on five normal subjects and three RP patients. ERGs on control subjects were recorded at nine different temporal frequencies (between 2 and 60 Hz) for five different stimulus sizes: FF, 70°, 60°, 50° and 40° diameter circular stimuli. Experiments on RP patients involved rod- and L-cone-driven ERG measurements with FF and 40° stimuli at 8 and 48 Hz. Response amplitudes were defined as those of the first harmonic component after Fourier analysis.

The increased responses with smaller stimuli in normal subjects to rod-isolating stimuli indicate that a fundamentally different mechanism drives the ERGs in comparison with the cone-driven responses. We propose that the increased responses are caused by stray light stimulating the peripheral retina, thereby allowing peripheral rod-driven function to be studied using the triple silent substitution technique at photopic luminances. The method is effective in studying impaired peripheral rod- and cone- function in RP patients. 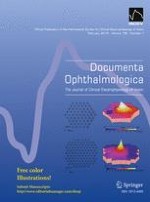 Retinopathy from hydroxychloroquine is not related to lupus or rheumatoid arthritis

Electroretinography in idiopathic intracranial hypertension: comparison of the pattern ERG and the photopic negative response