Head and neck squamous cell carcinoma (HNSCC) is one of the most common types of cancer in India with high incidence and rapid recurrence rates. Here, we aimed to investigate the role of β-catenin, a developmental pathway gene, in HNSCC therapy resistance, DNA damage response, recurrence and prognosis.

We observed β-catenin up-regulation in cut margin areas of recurrent patients compared to their corresponding tumor regions, which subsequently could be associated with poor prognosis. In addition, we found that LiCl-mediated up-regulation of β-catenin in HNSCC-derived cells led to cisplatin resistance, evasion of apoptosis, enhanced DNA repair and enhanced migration. The effects of β-catenin silencing correlated with its putative role in chemo-resistance and DNA damage response.

From our results we conclude that β-catenin may contribute to HNSCC therapy resistance and disease relapse. As such, β-catenin may be explored as a therapeutic target along with conventional therapeutics. 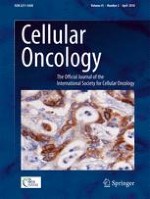 Role of Glypican-3 in the growth, migration and invasion of primary hepatocytes isolated from patients with hepatocellular carcinoma