In the current study, we examined the potential significance of CD44 expression on lymphokine-activated killer (LAK) cells in their interaction and killing of melanoma cells. Stimulation of splenocytes with IL-2 led to a significant increase in the expression of CD44 on T cells, NK cells, and NKT cells. Treatment of melanoma-bearing CD44 WT mice with IL-2 led to a significant reduction in the local tumor growth while treatment of melanoma-bearing CD44 KO mice with IL-2 was ineffective at controlling tumor growth. Furthermore, the ability of splenocytes from IL-2-treated CD44 KO mice to kill melanoma tumor targets was significantly reduced when compared to the anti-tumor activity of splenocytes from IL-2-treated CD44 WT mice. The importance of CD44 expression on the LAK cells was further confirmed by the observation that adoptively transferred CD44 WT LAK cells were significantly more effective than CD44 KO LAK cells at controlling tumor growth in vivo. Next, the significance of the increased expression of CD44 in tumor killing was examined and showed that following stimulation with IL-2, distinct populations of cells with low (CD44lo) or elevated (CD44hi) expression of CD44 are generated and that the CD44hi cells are responsible for killing of the melanoma cells. The reduced killing activity of the CD44 KO LAK cells did not result from reduced activation or expression of effector molecules but was due, at least in part, to a reduced ability to adhere to B16F10 tumor cells. 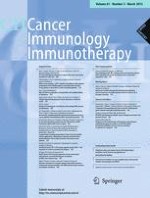 Response to the rebuttal letter of Kountouras and colleagues regarding the paper by Codolo et al. ‘HP-NAP inhibits the growth of bladder cancer in mice by activating a cytotoxic Th1 response’

Design of immunogenic and effective multi-epitope DNA vaccines for melanoma

Advances in cellular therapy: 6th international symposium on the clinical use of cellular products, March 24 and 25, 2011, Erlangen, Germany