While the importance of lymphadenectomy is well-established for patients with resectable pancreatic cancer, its direct impact on survival in relation to other predictive factors is still ill-defined.

The National Cancer Data Base 2006–2015 was queried for patients with resected pancreatic adenocarcinoma (stage IA–IIB). Patients were dichotomized into the following two groups, those with 1–14 resected lymph nodes and those with ≥ 15. Optimal number of resected lymph nodes and the effect of lymphadenectomy on survival were assessed using various statistical modeling techniques. Mediation analysis was performed to differentiate the direct and indirect effect of lymph node resection on survival.

While higher number of resected lymph nodes increases lymph node positivity and is associated with better overall survival, most of the observed survival benefit is mediated by chemotherapy and treatment at high-volume centers. 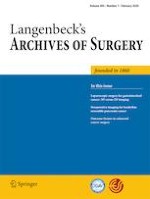