Extradural haematoma (EDH) is a serious neurosurgical emergency in children, which confers significant morbidity and mortality rates. The objective of this study was to retrospectively evaluate the role of post-operative imaging in children with EDH who were managed surgically in a national paediatric neurosurgical unit over a 9-year period (January 2008 to December 2016).

A retrospective case review of paediatric patients who underwent surgical evacuation of extradural haematoma between January 2008 and December 2016 was performed. This included demographic and clinical details, indications for post-operative imaging and outcomes.

Seventy patients underwent surgical management of EDH during this time period, with a male preponderance (69%) and a mean age of 8 years. The commonest location of haematoma in this cohort was in the parietal region (n = 24), with a mean maximum thickness of 25.9 mm and mean volume of 57 ml. Post-operative imaging was performed in 84% of patients. However, only one patient had a change in the course of their post-operative management as a result of post-operative imaging findings.

Post-operative imaging in asymptomatic paediatric patients after evacuation of EDH could therefore be avoided as a routine investigation. 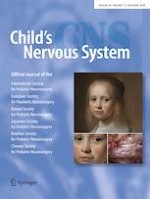 Midline spinous process splitting laminoplasty in a newborn with thoracolumbar epidural hematoma: a bone-sparing procedure based on anatomy and embryology