Oligometastatic patients with up to three liver metastases of a maximum diameter of 6 cm were treated with SBRT. Total dose was 75 Gy in three consecutive fractions. Study endpoints were efficacy of this fractionation in terms of local control (LC), overall survival (OS), toxicity, and prognostic factors affecting OS and LC.

Between February 2010 and December 2016, we enrolled 202 patients, with a total of 268 unresectable liver metastases. Median follow-up time from SBRT was 33 months (5–87 months). One-, 3‑, and 5‑year LC rates were 92%, 84%, and 84%, respectively. In univariate analysis, the primary histology and previous local ablative therapies were significant. Median OS was 21 months and the survival rates were 79%, 27%, and 15% at 1, 3, and 5 years after SBRT, respectively. At univariate analysis, sex, primary disease histology, intra-, and extra-hepatic progression were significant prognostic factors. This analysis confirmed the absence of late toxicity >G3.

This study confirms the efficacy and safety of SBRT for unresectable liver metastases. Selection of cases may improve survival and LC. 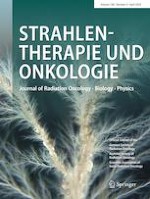