Roux-en-Y gastric bypass procedure performed with the da Vinci robot system: is it worth it? | springermedizin.de Skip to main content
TOOLBAR 1 2 3 4
SUCHE MENÜ 1 2 3 4

The Roux-en-Y gastric bypass procedure (RYGBP) is in many countries the gold standard for obtaining long-lasting weight reduction and improvement of obesity-related comorbidities. However, performing this operation by standard laparoscopic techniques requires important surgical skills because of the anastomoses involved. The da Vinci surgical robot system with its enhanced degrees of freedom in motion and three-dimensional vision is designed to overcome the difficulties encountered in traditional laparoscopic surgery with suturing and delicate tissue handling.

Overall, the total operating time was shorter for the laparoscopic cases (127 vs 212 min; p < 0.05). However, the last 10 robotic cases were performed in the same time span as the laparoscopic cases (136 vs 127 min). The total robotic setup time remained constant at about 30 min. There were no differences in postoperative complications between the two groups in terms of anastomotic leakage or stenosis. In the robotic group, more conversions to open surgery were noted. Early in the study, four patients (9%) had to undergo conversion to standard laparoscopic techniques due to inadequate setup of the robotic arms. Five patients (11%), however, had to undergo conversion to open surgery because of intestinal laceration during manipulation of the intestines with the robotic instruments. The costs were higher for robotic surgery than for standard laparoscopic RYGBP, mainly because of the extra equipment used, such as ultrasonic devices.

The RYGBP procedure can be performed safely with the da Vinci robot after a learning curve of about 35 cases. At this writing, however, it is not clear whether the da Vinci system offers a real advantage over standard laparoscopic techniques. 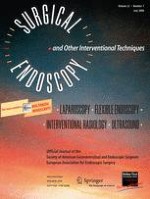