Minimally invasive surgery, such as laparoscopic adrenalectomy and robotic adrenalectomy, has become a treatment of choice for benign adrenal tumors. Efforts are ongoing to minimize the invasiveness of the procedure and to reduce the number of port sites. The primary endpoint of this study was the safety and feasibility of a reduced-port site technique for robotic posterior retroperitoneal adrenalectomy (RPRA).

No major complications were observed following RPRA in the three groups of patients. Operation time, pain score, and hospital stay did not differ significantly among these three groups.

RPRA using a reduced-port site system was safe and feasible and may be a good alternative to conventional three-port site RPRA for benign adrenal tumors in certain situations.
Anzeige 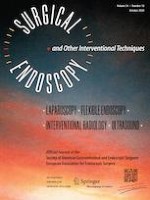 Post-bariatric surgery lab tests: are they excessive and redundant?

Delay in emergency hernia surgery is associated with worse outcomes