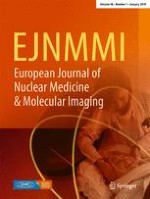 Correction to: Highlights from 2017: impactful topics published in the Annals of Nuclear Medicine