Enhanced recovery after surgery (ERAS®) principles have been beneficial in major abdominal surgery. ERAS® was instituted in our breast surgery practice in 2017. The goal of this study was to evaluate the feasibility of outpatient mastectomies before and after ERAS®.

A retrospective review of all mastectomies between 1/2013 and 6/2018 was performed. Patients receiving autologous flap reconstruction were excluded. The institution-specific ERAS® pathway began on February 1, 2017. Patient characteristics, operative intervention, and postoperative outcomes were compared between pre-ERAS® and post-ERAS® groups and between outpatient and inpatient subgroups. Continuous and categorical variables were compared using Wilcoxon rank-sum and Chi-square analyses.

ERAS® principles can be applied to breast cancer patients and allow for outpatient mastectomies with no increase in postoperative morbidity. 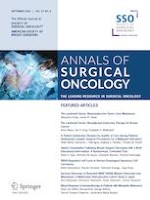 CMS Hospital Compare System of Star Ratings and Surgical Outcomes Among Patients Undergoing Surgery for Cancer: Do the Ratings Matter?