We here document a sarcoma with a recently reported MGA–NUTM1 fusion. A 49-year-old man presented with a nodule in the right lung, which grew to a giant mass in 5 years. The tumor showed uniform oval to spindle cell proliferation in a hypervascular stroma, associated with focal myxoid change and peculiar collagen deposition resembling an osteoid. The tumor showed an undifferentiated phenotype, including negativity for cytokeratin, although it was immunoreactive to BCOR and MUC4, and was initially suspected as BCOR-associated sarcoma. After complete resection, the tumor recurred in the mediastinal lymph node, and the patient died of the disease. RNA sequencing detected MGA (exon 22)–NUTM1 (exon 3), which was confirmed by reverse transcriptase-polymerase chain reaction, Sanger sequencing, fluorescence in situ hybridization, and NUT immunohistochemistry. Clinicopathological features of the present case were similar to some of the reported cases of MGA–NUTM1 sarcomas, suggesting the emergence of a distinct tumor subtype. 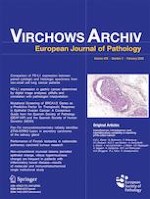 Diagnosis of myocardial infarction at autopsy: AECVP reappraisal in the light of the current clinical classification