To study the association of test anxiety, scholastic performance and dietary intake in urban and rural adolescents. 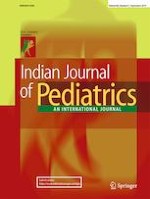 Microvillous Inclusion Disease as a Cause of Protracted Diarrhea

Is Dietary Intake Related to Test Anxiety and Scholastic Performance in Indian Adolescents? The Search Continues